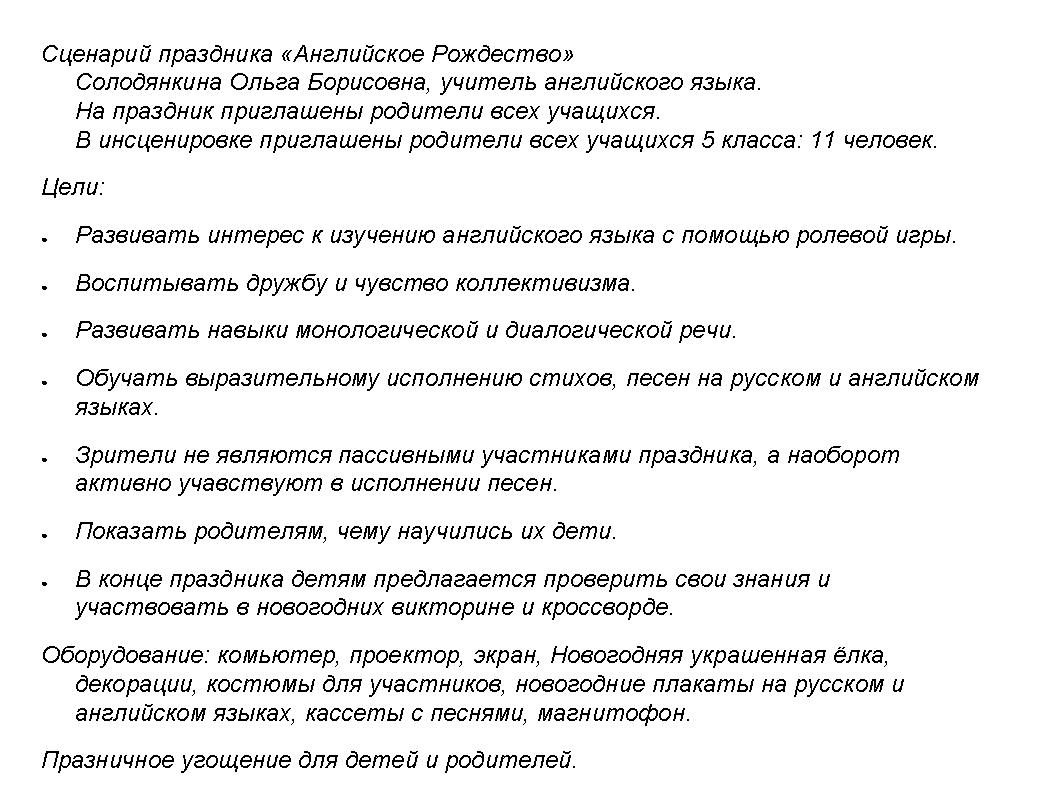 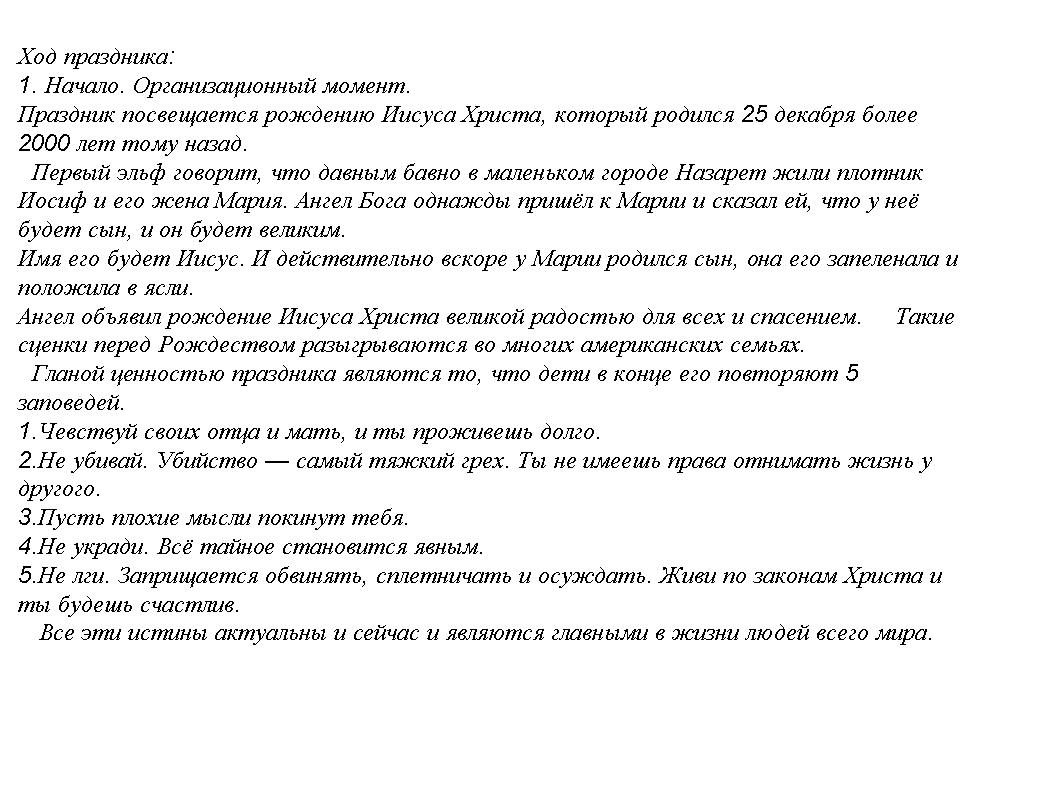 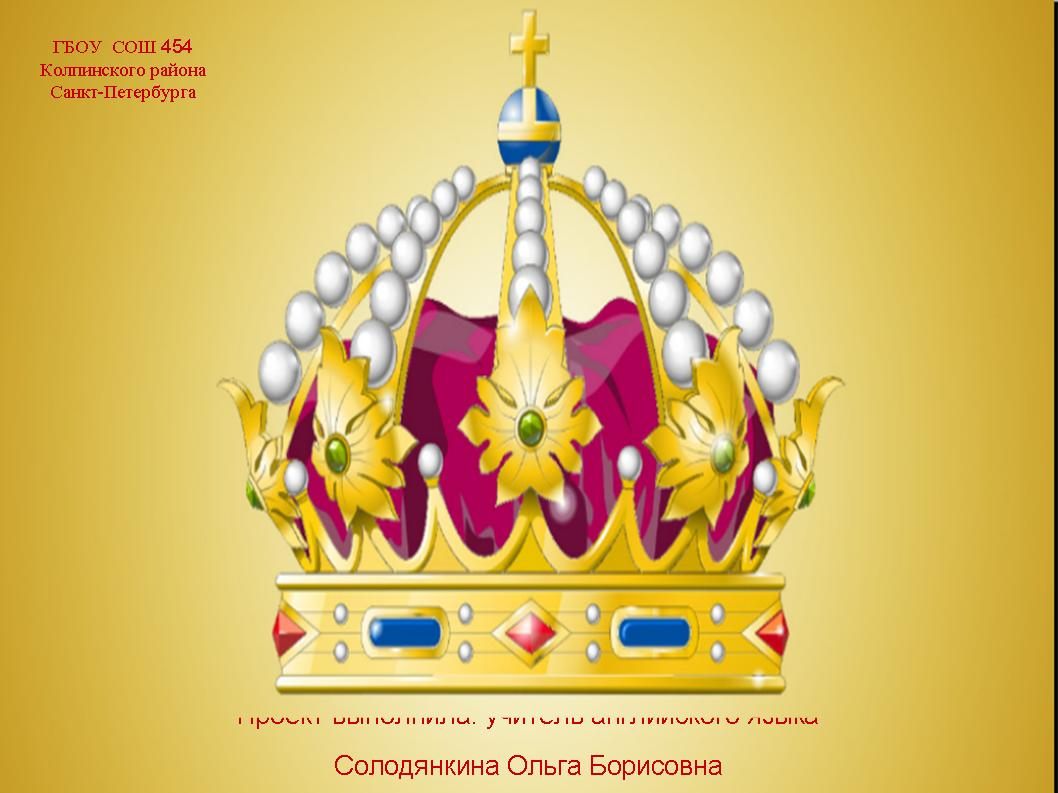 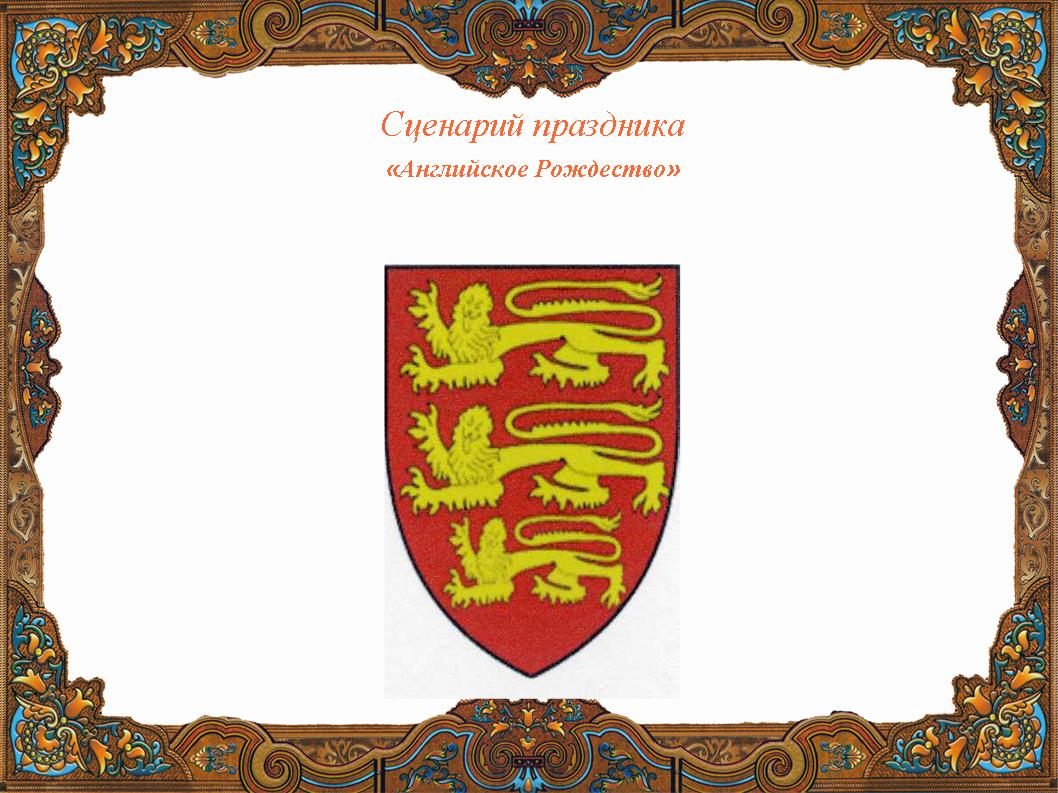 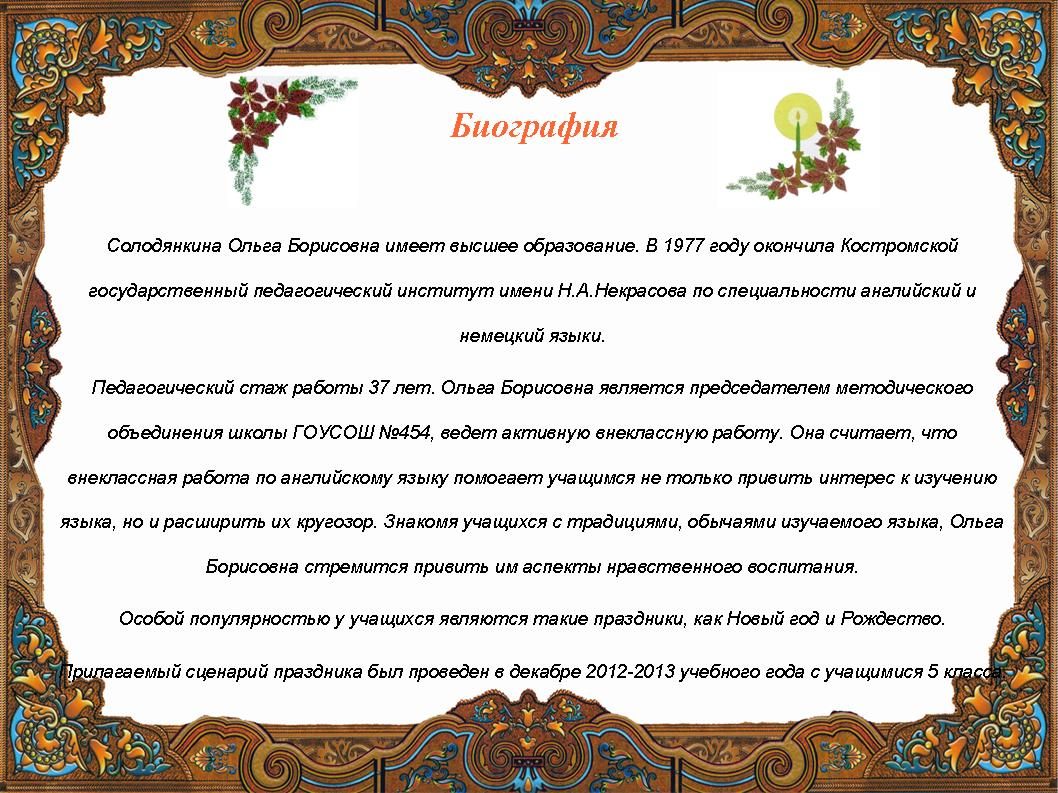 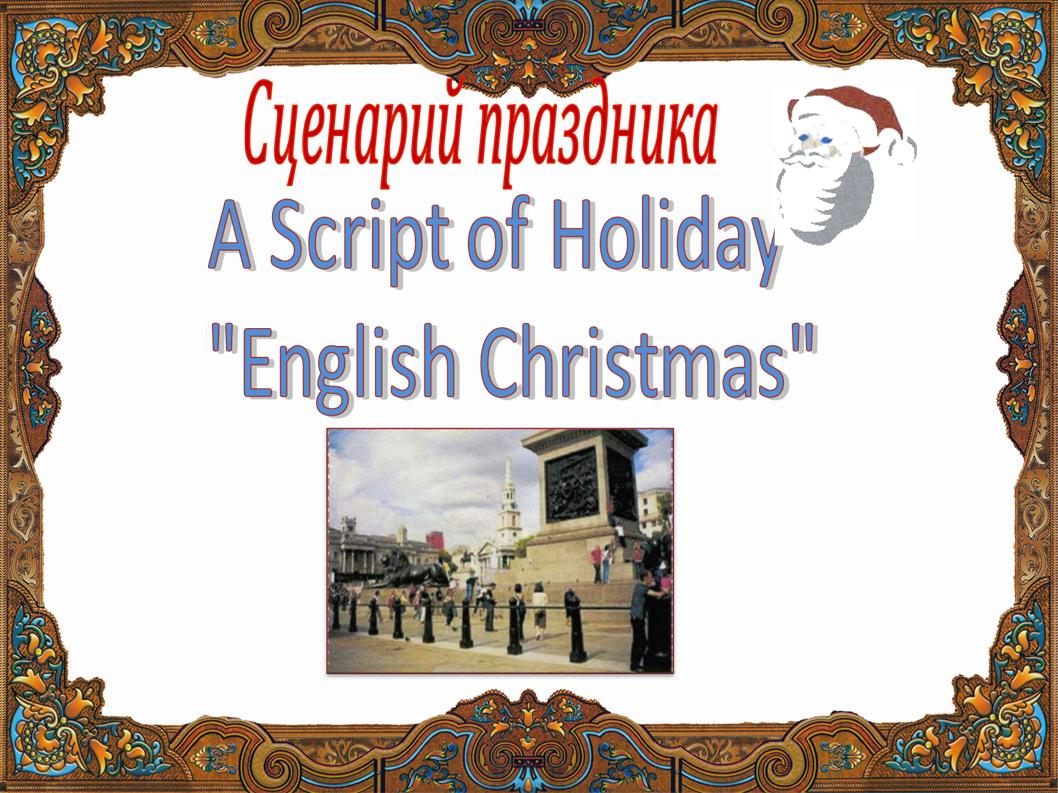 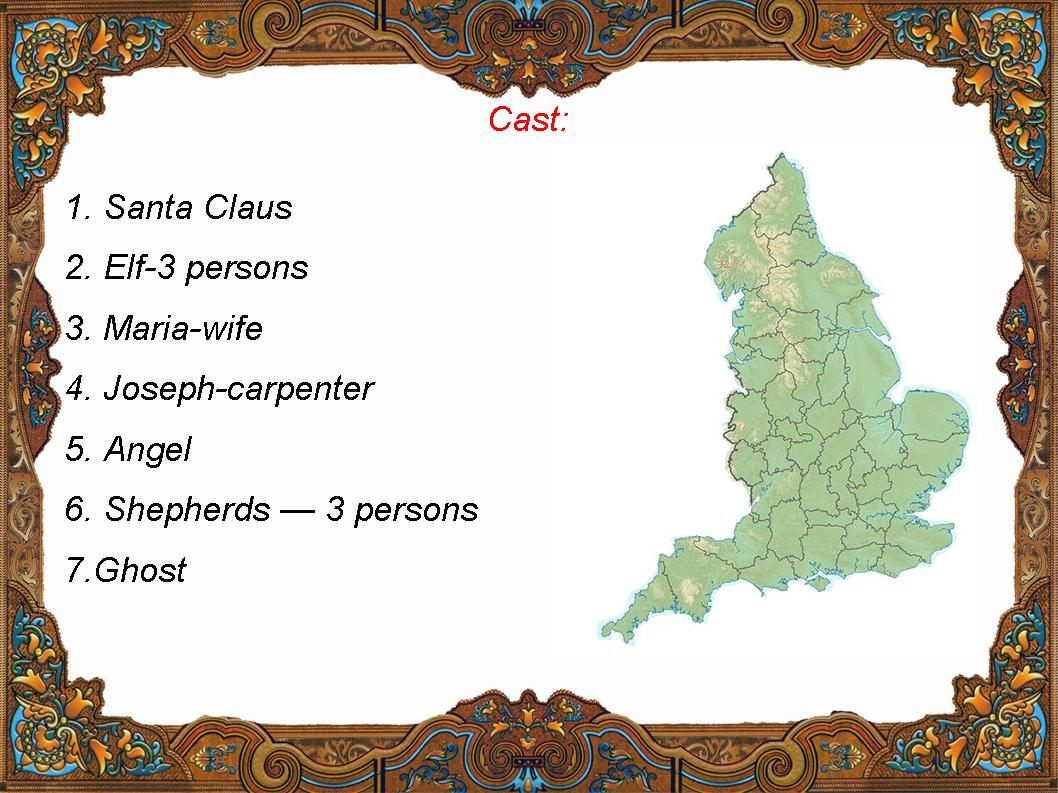 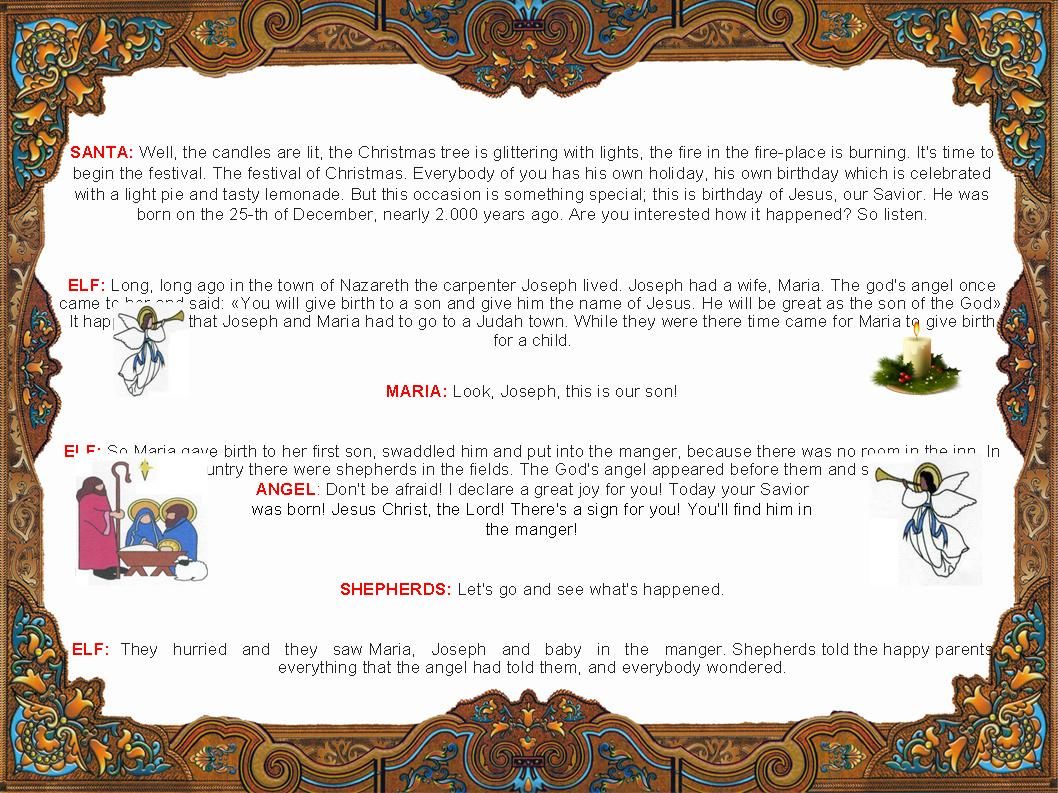 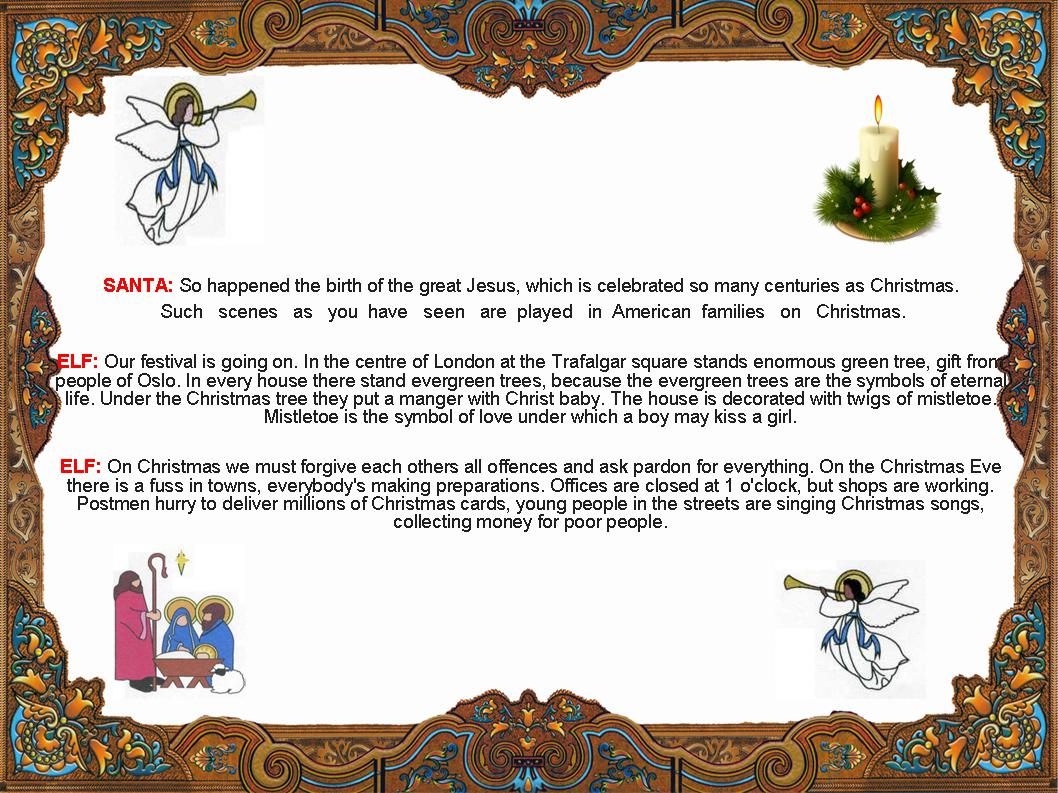 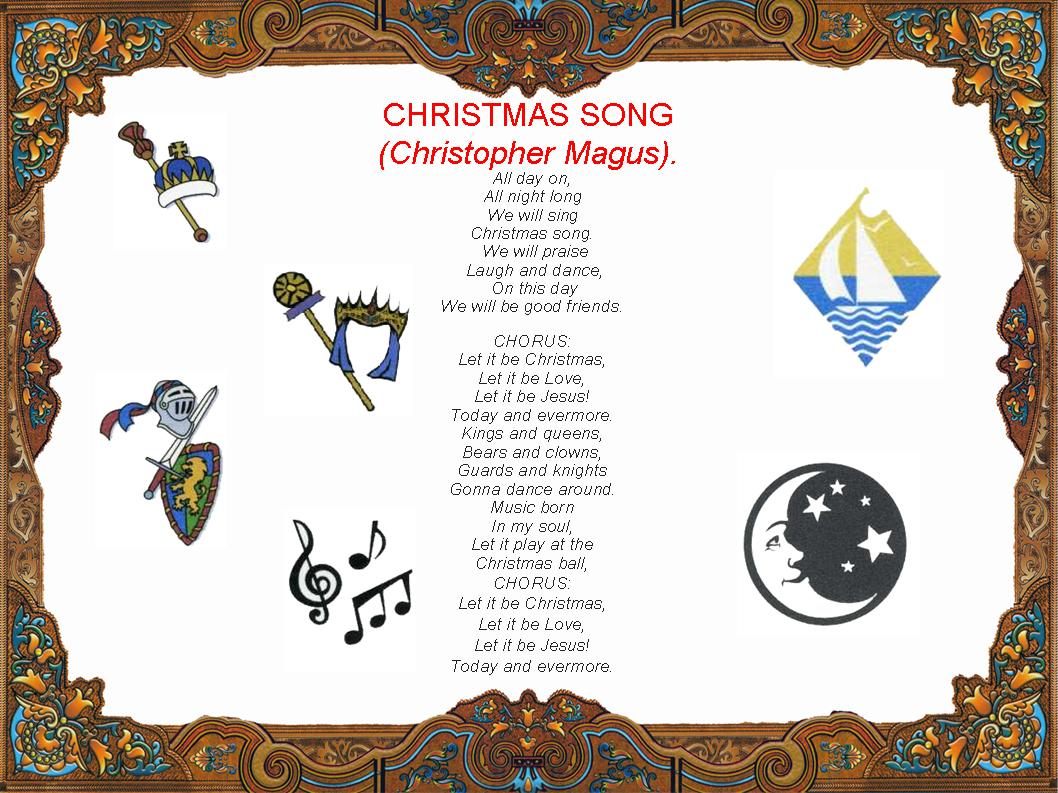 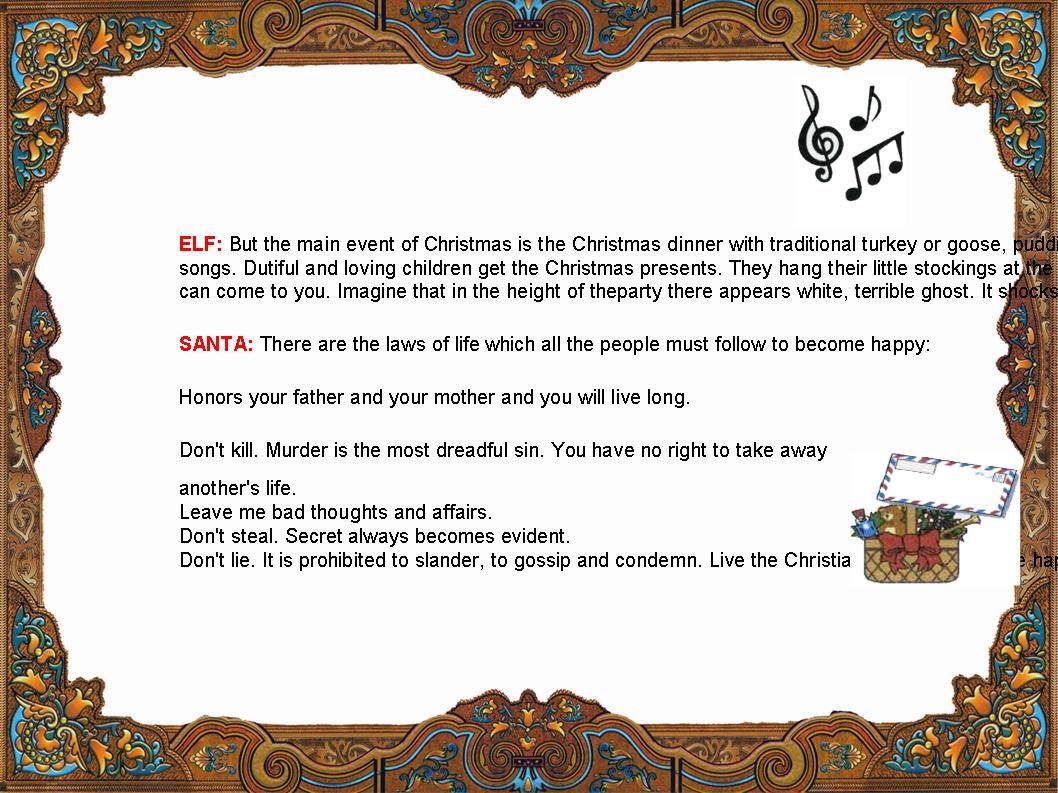 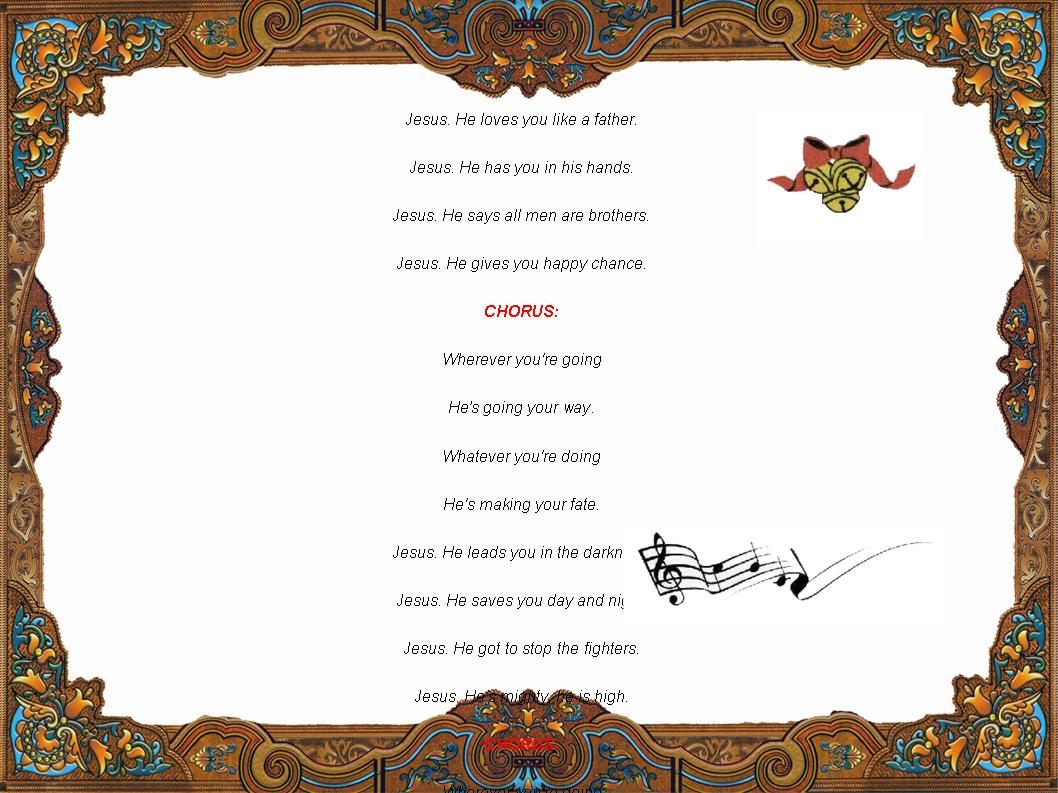 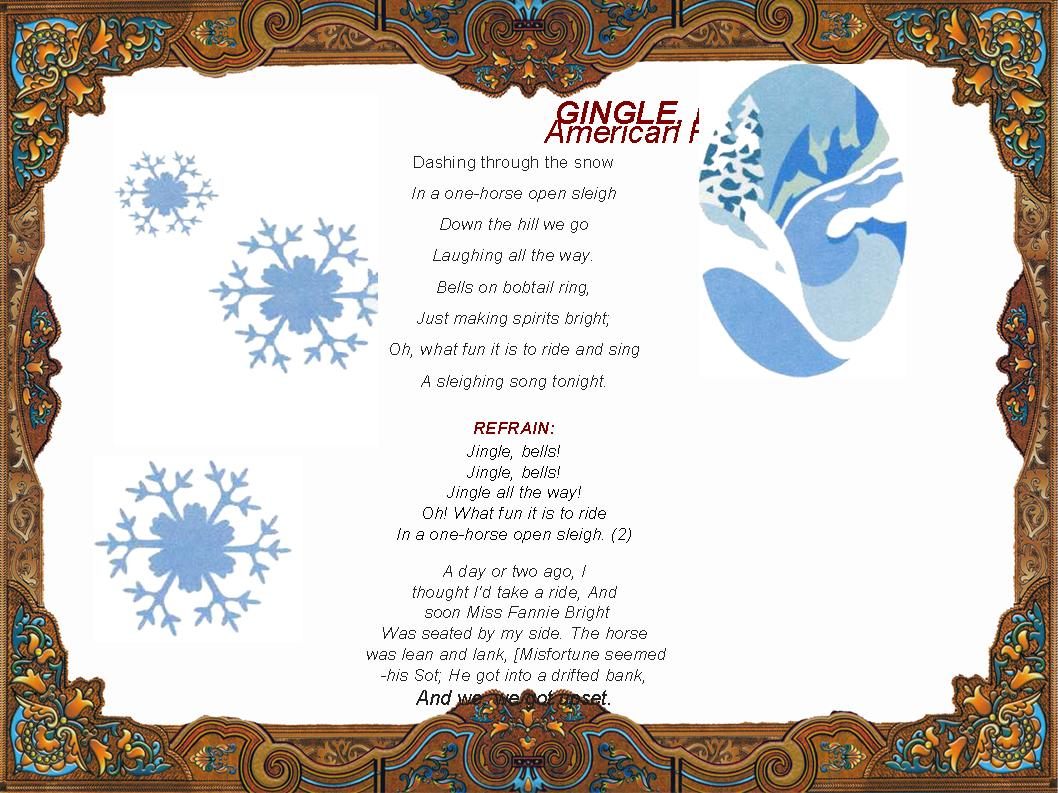 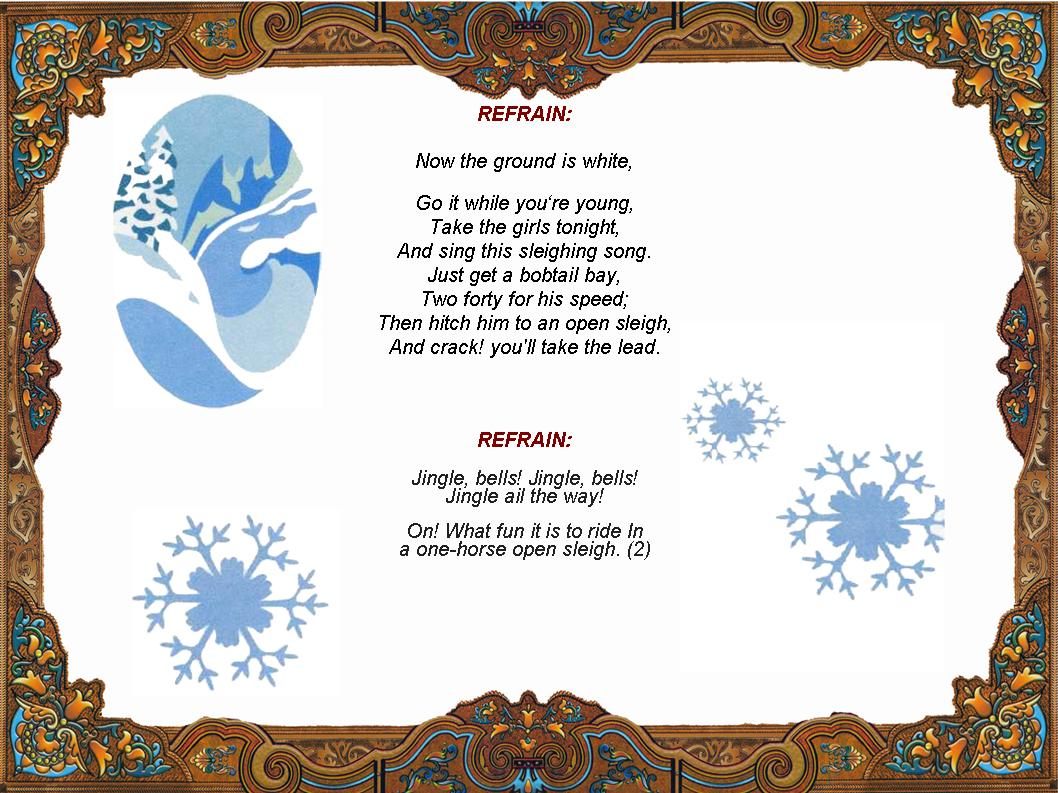 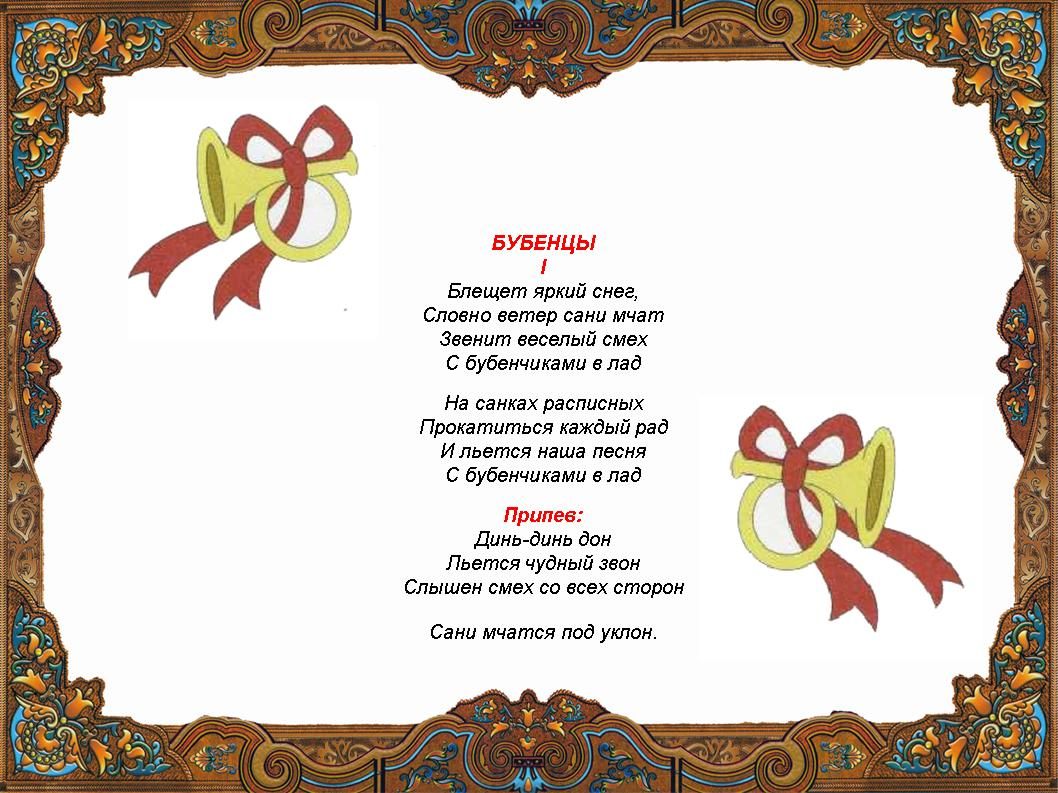 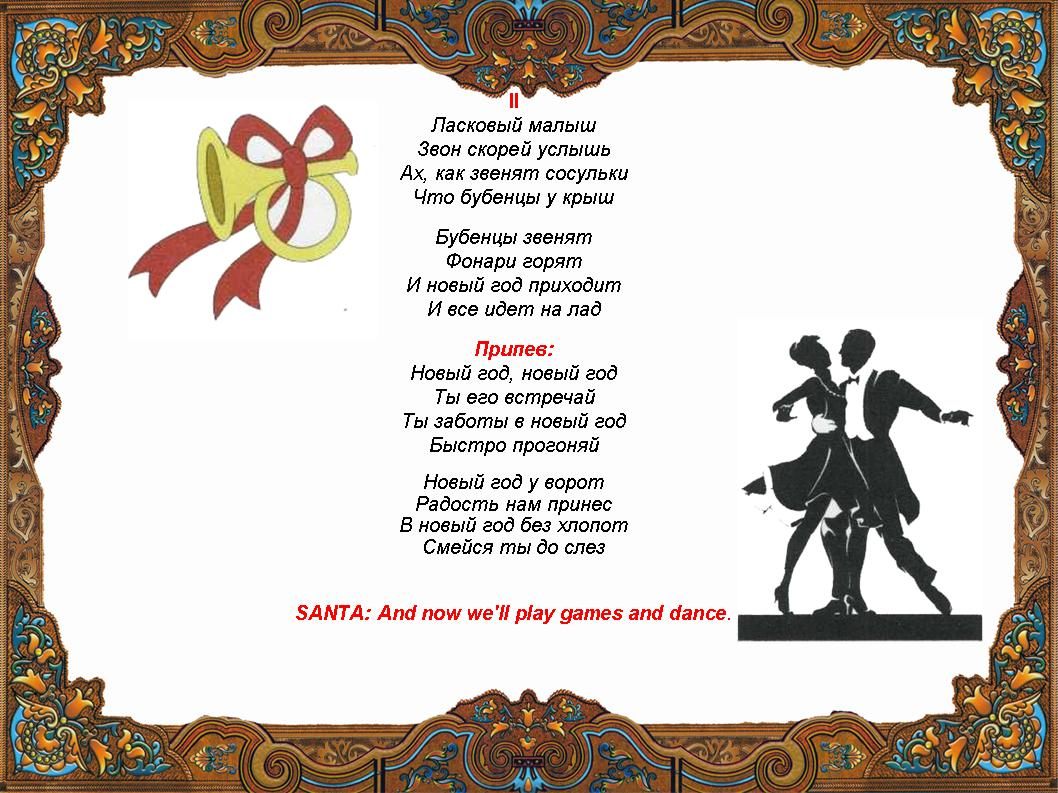 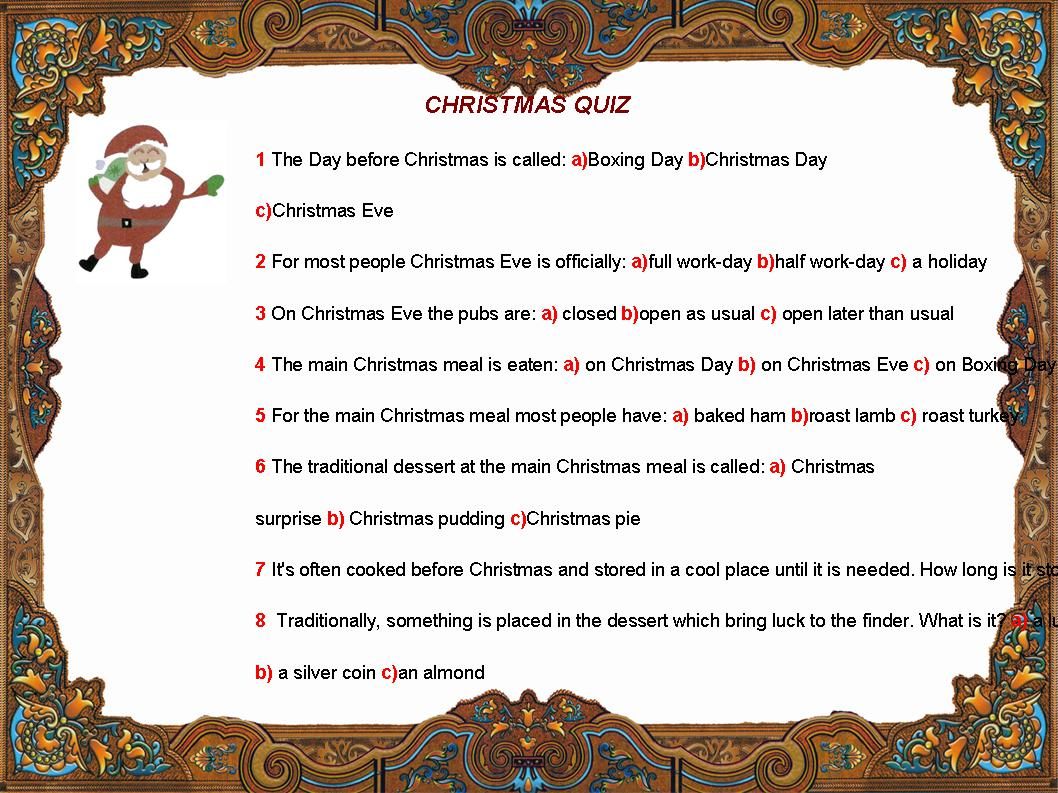 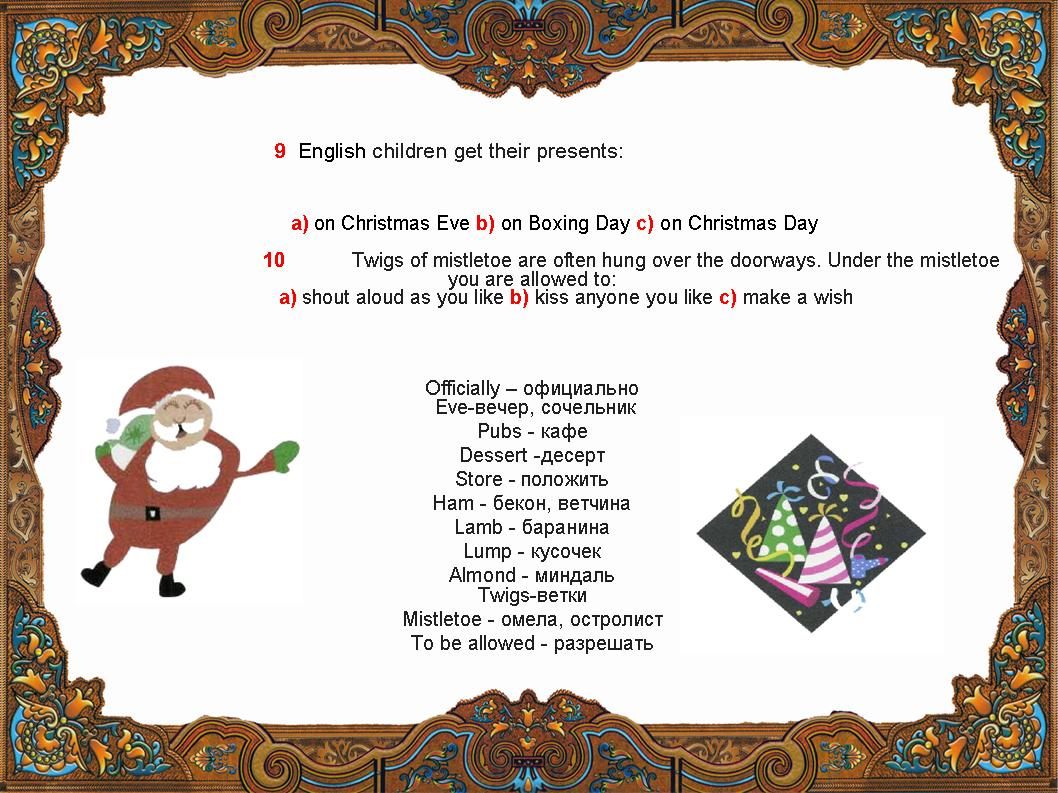 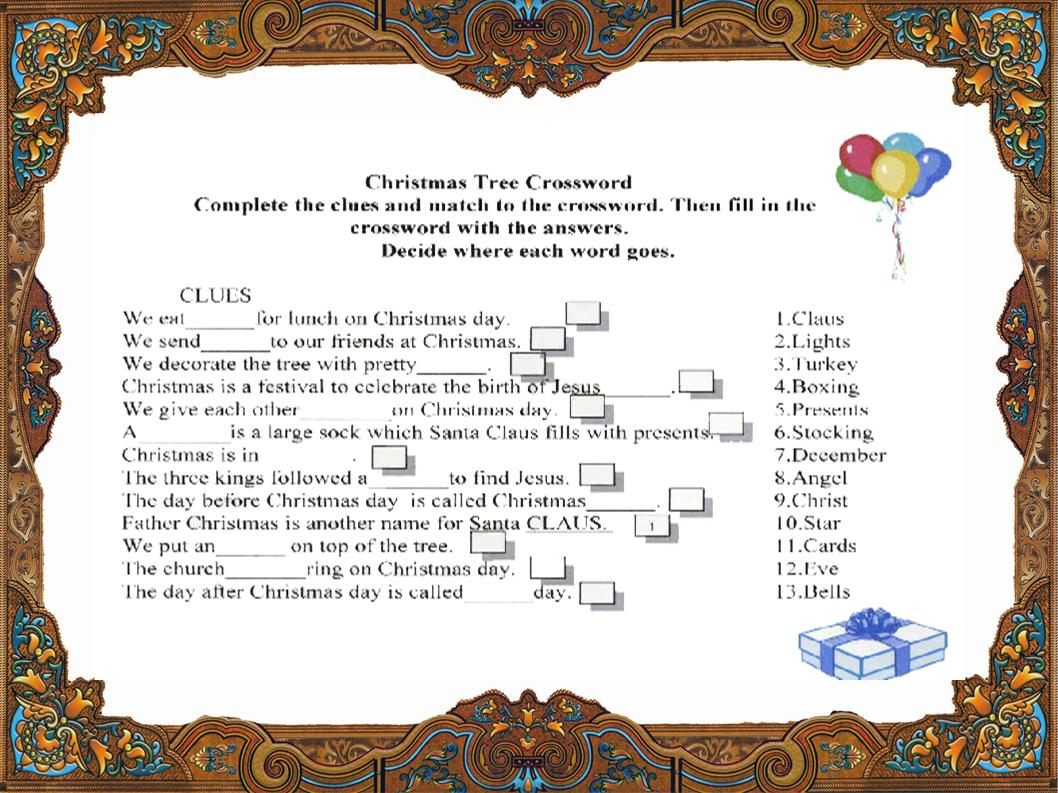 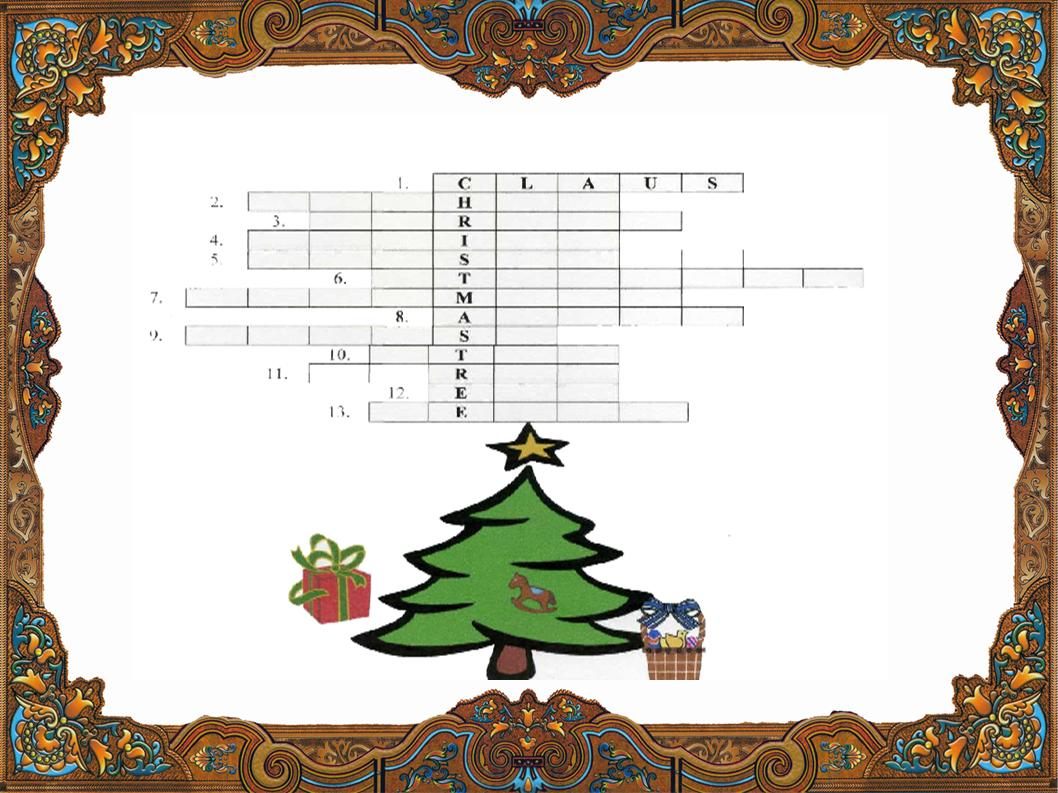 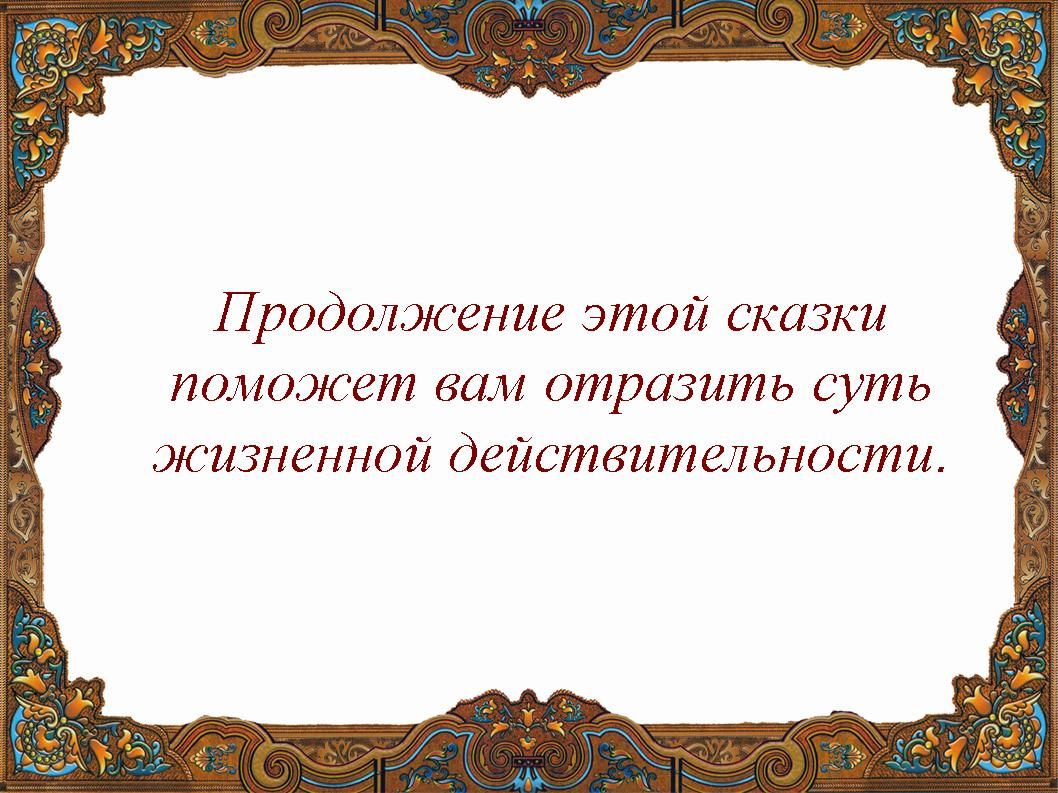 SANTA: Well, the candles are lit, the Christmas tree is glittering with lights, the fire in the fire-place is burning. It's time to begin the festival. The festival of Christmas. Everybody of you has his own holiday, his own birthday which is celebrated with a light pie and tasty lemonade. But this occasion is something special; this is birthday of Jesus, our Savior. He was born on the 25-th of December, nearly 2.000 years ago. Are you interested how it happened? So listen.

Long, long ago in the town of Nazareth the carpenter Joseph lived. Joseph had a wife, Maria. The god's angel once came to her and said: “You will give birth to a son and give him the name of Jesus. He will be great as the son of the God”. It happened so that Joseph and Maria had to go to a Judah town. While they were there time came for Maria to give birth for a child.

Look, Joseph, this is our son!

So Maria gave birth to her first son, swaddled him and put into the manger, because there was no room in the inn. In that country there were shepherds in the fields. The God's angel appeared before them and said…

: Don't be afraid! I declare a great joy for you! Today your Savior was born! Jesus Christ, the Lord! There's a sign for you! You'll find him in the manger!

They hurried and they saw Maria, Joseph and baby in the manger. Shepherds told the happy parents everything that the angel had told them, and everybody wondered.

So happened the birth of the great Jesus, which is celebrated so many centuries as Christmas.

Such scenes as you have seen are played in American families on Christmas.

Our festival is going on. In the centre of London at the Trafalgar square stands enormous green tree, gift from people of Oslo. In every house there stand evergreen trees, because the evergreen trees are the symbols of eternal life. Under the Christmas tree they put a manger with Christ baby. The house is decorated with twigs of mistletoe. Mistletoe is the symbol of love under which a boy may kiss a girl. ELF: On Christmas we must forgive each others all offences and ask pardon for everything. On the Christmas Eve there is a fuss in towns, everybody's making preparations. Offices are closed at 1 o'clock, but shops are working. Postmen hurry to deliver millions of Christmas cards, young people in the streets are singing Christmas songs, collecting money for poor people.

All day on,
All night long
We will sing
Christmas song.
We will praise
Laugh and dance,
On this day
We will be good friends.

Let it be Christmas,
Let it be Love,
Let it be Jesus!
Today and evermore.
Kings and queens,
Bears and clowns,
Guards and knights
Gonna dance around.
Music born
In my soul,
Let it play at the
Christmas ball,

: But the main event of Christmas is the Christmas dinner with traditional turkey or goose, pudding and Christmas presents. Christmas is the family event, all are gathering at one table, play games, sing Christmas songs. Dutiful and loving children get the Christmas presents. They hang their little stockings at the fireplace. In the morning they find that the stockings are full of presents. They were sent by Santa. Sometimes ghosts can come to you. Imagine that in the height of theparty there appears white, terrible ghost. It shocks the people.

There are the laws of life which all the people must follow to become happy:

Jesus. He loves you like a father.
Jesus. He has you in his hands.
Jesus. He says all men are brothers.
Jesus. He gives you happy chance.

Wherever you're going
He’s going your way.
Whatever you're doing
He's making your fate.

Jesus. He leads you in the darkness.
Jesus. He saves you day and night.
Jesus. He got to stop the fighters.
Jesus. He's mighty, he is high.

Dashing through the snow
In a one-horse open sleigh
Down the hill we go
Laughing all the way.
Bells on bobtail ring,
Just making spirits bright;
Oh, what fun it is to ride and sing
A sleighing song tonight.

A day or two ago, I
thought I'd take a ride, And
soon Miss Fannie Bright
Was seated by my side. The horse
was lean and lank, [Misfortune seemed
-his Sot; He got into a drifted bank,
And we, we got upset.

Now the ground is white,
Go it while you‘re young,
Take the girls tonight,
And sing this sleighing song.
Just get a bobtail bay,
Two forty for his speed;
Then hitch him to an open sleigh,
And crack! you'll take the lead.

1 The Day before Christmas is called:

2. For most people Christmas Eve is officially:

3. On Christmas Eve the pubs are:

4. The main Christmas meal is eaten:

a) on Christmas Day

b) on Christmas Eve

5. For the main Christmas meal most people have:

6. The traditional dessert at the main Christmas meal is called:

7. It's often cooked before Christmas and stored in a cool place until it is needed. How long is it stored?

a) as much as several weeks

b)as much as a week

c)as much as several months

8. Traditionally, something is placed in the dessert which bring luck to the finder. What is it?

a) a lump of sugar

b) a silver coin

9. English children get their presents:

a) on Christmas Eve

b) on Boxing Day

10. Twigs of mistletoe are often hung over the doorways. Under the mistletoe you are allowed to: